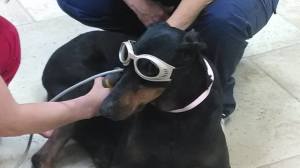 What is low-level laser therapy?

Also known as cold laser, low-level laser therapy is a form of photo-therapy used to stimulate tissue repair and provide pain management. The laser uses focused red and infrared light to stimulate tissue at and below the surface of your pet’s skin. The biochemical effect of the low-level light increases the production of cellular energy and thus promotes cellular regeneration, production of collagen for tissue repair, and vascular dilation and synthesis for better circulation. Light from the low-level laser also encourages production of the body’s natural pain-relievers.

What is the history of low-level laser therapy in veterinary medicine?

The first low-level laser was developed in 1960 and early testing showed an increase in the speed and overall success of the healing process when it was used. Originally used for wound repair, clinical trials done throughout the 1970’s showed the applicability of the low-level laser in therapy to be more widespread than previously thought. The 1990’s came with the invention of more powerful and effective versions of the cold laser, eventually increasing its popularity in the field of rehabilitation.

On which types of animals is low-level laser therapy practiced?

Animals involved in sports or other physically demanding activities have been the most common candidates for low-level laser therapy. Horses and sled dogs are among those most frequently benefiting from this form of therapy, as their lifestyles make them more prone to injury. However, as the field of canine and feline rehabilitation expands, use of the low-level laser is becoming more popular as it has some tremendous benefits.

If you have any questions, comments, or concerns about how laser procedures can enhance your pet’s care, please contact us today.